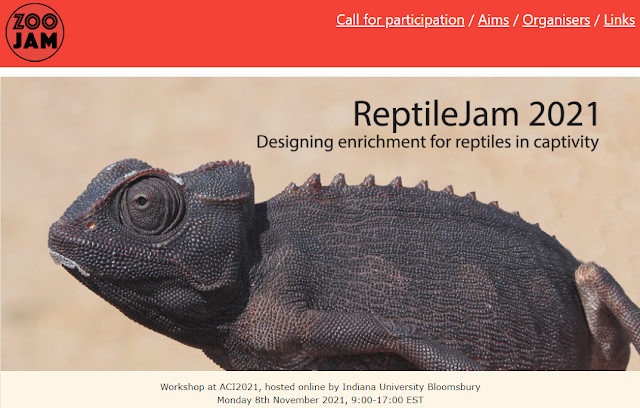 The workshop focuses on reptiles and will explore what kinds of enrichment are appropriate for meeting key behavioural goals. Bringing together knowledge and skills from the animal expert, computer science and interaction design communities, we hope to co-create some novel experiences for these animals, using technology as an enabler.

Here's where to register if you'd like to take part: https://www.eventbrite.com/e/reptilejam-2021-designing-enrichment-for-reptiles-in-captivity-registration-165479001147

Posted by Fiona French at 09:32 No comments:


Another visit to Blair Drummond, 6 years later!  This time I went with Ilyena Hirsky-Douglas and we met Lynn, who manages the Large Mammals.  Lynn showed us round and invited us to give one of the white rhinos a mud bath ... so we rolled up our sleeves. 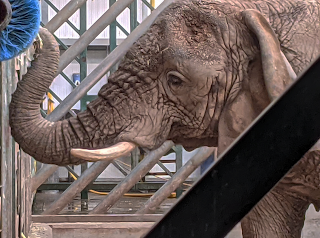 Giraffes up close were gorgeous and we learned how mischievous they can be. I'd love to design some toys for them.

And we saw Mondy, who is starting to show her age with lots of lovely wrinkles - she's around 48 years old. She's living on her own these days, since her previous companion passed, and she might be a perfect candidate for some enrichment, just like Valli at Skanda Vale.

Posted by Fiona French at 06:28 No comments:

This year's Animal Centred Computing Summer School (https://www.animalcomputing.com/) kicked off with a one-day workshop on measuring animal emotions. Many of the talks were focused on using FACS (Facial Action Coding System: https://animalfacs.com/), which have so far been developed for chimps, macaques, gibbons, orangutans, dogs, cats and horses (as well as the in-depth human version). 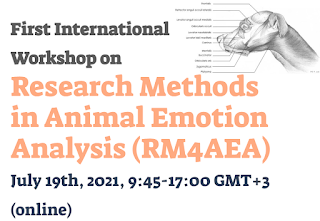 There seemed to be a lot of interest in trying to code a similar system for elephants - essentially creating a database of distinct muscle movements so that anyone could mark up elephant expressions using a shared codified language.  In theory, these could then be cross-referenced to understand the emotions being expressed by the animal.

The problem with elephants is that they use their trunks to gesticulate, so it might be akin to trying to create a human FACS for an excited Italian - yet we only use facial mucles to code human expressions.  None of the other species have a facial feature as expressive as the elephant's trunk, which is simultaneously a nose and an appendage like a limb with a hand, used for manipulating tools, grasping, pulling, delicately feeling things, caressing, waving and striking blows - as well as being used for sucking up water, foraging and making noises.  So do we ignore it as part of the face, or try to disentangle its various motions?  And in regard to pinpointing individual muscles, trunks also pose a challenge because they have 40,000 muscles...  Project on hold for the moment!

The rest of the ACC Summer School was interesting and enjoyable as usual, with great talks from some fascinating people.

Posted by Fiona French at 07:56 No comments: 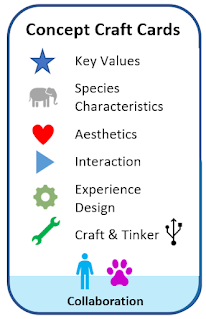 Ran a tech demo at this year's Creativity & Cognition conference, held virtually in June this year, and also will be live in Venice in 2022.

It was an opportunity to try out some of the Concept Craft Cards (PhD output) with Clara.  We set up some briefs on Miro and invited participants to move cards around, contribute their own ideas and notes...  It was a shame that people were neither co-located nor collaborating simultaneously, but the session did generate sme interest and several people asked to keep in touch and try out the deck with their own projects - which was great!

Snapshot of Miro board during the demo below: 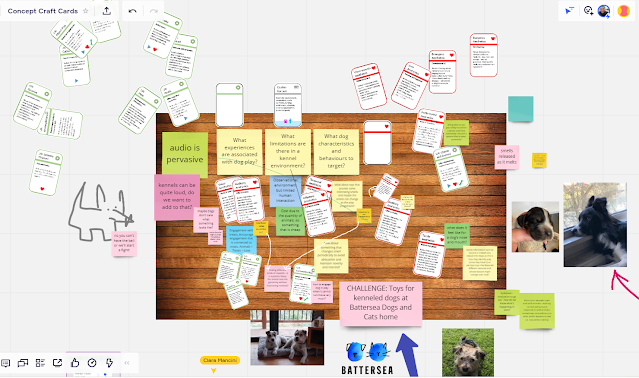 Posted by Fiona French at 15:11 No comments:

Our Ethics paper in Academic Mindtrek 2021

I managed to join this workshop, part of TEI 2021, at the last minute!

TACTJAM, described as a collaborative playground for exploring tactile stimulation, was supposed to take place around the time of the conference (Feb 2021) but the hardware and software weren't ready to be shipped to participants, so we played with the virtual client online, and the practical part was rearranged for later in the year.

So in May, people reconvened via Discord and we set up the hardware, which enables users to create tactile patterns using a range of tiny "tactons" (buzzers) that are applied to parts of the body.

As I was thinking about developing an app that would enable humans to experience what it might be like to be an elephant, I messed around with tactons on the nose to see what kinds of effects I could generate.  I then enlisted Skomer to try the tacton-nose experience, but she wasn't having any of it.  I managed to buzz her on her ear and she jumped straight off my lap in response.

The coolest thing about this workshop was that we were able to upload our designs to the cloud, so that everyone else could download and try out each experience. Thus, we could collaborate remotely using touch.

Posted by Fiona French at 15:10 No comments:

News from Skanda Vale - the slider has finally been dismantled by Valli, when she was getting annoyed at not being able to reach some juicy branches in the enclosure!  It lasted for over a year, and provided quite a lot of interest for Lakshmi in the evenings, so we can consider it a partial success.

In the end, it took less than a minute to pull off the fence. Hope it made her feel better!

Posted by Fiona French at 16:04 No comments: